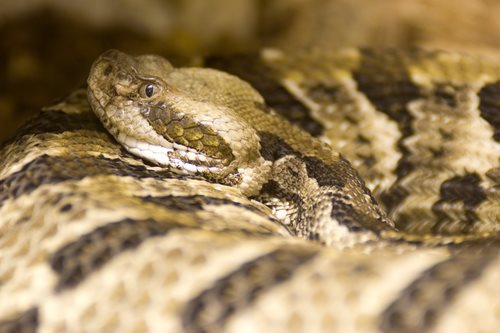 On November 13, 2012, the Department of Justice announced that Robroy MacInnes from Fort Myers and Robert Keszey of Bushnell, Florida were charged for trafficking rattlesnakes.  The company Glades Herp Farm Inc was also named in the indictment.


The two men were the co-owners of Glades Herp Farm Inc, and they were officially charged with conspiring to traffic threatened reptiles and trafficking protected timber rattlesnakes.  The crimes are a direct violation of the Lacey Act—which prohibits the trafficking of wildlife that was illegally obtained in the first place.  The two men face a maximum penalty of five years in prison and a fine up to $250,000 for each offense.


Court documents show that the two men illegally collected the protected snakes from Pennsylvania and New Jersey from 2007 to 2008.  The two men also bought eastern timber rattlesnakes that were illegally collected in the state of New York, and they transported the threatened eastern indigo snakes from Florida to Pennsylvania as well.  The men violated the Lacey Act after they bought the eastern timber rattlesnakes and had the snakes transported to Florida.


The eastern indigo snake is the longest snake species native to North America, and it is considered threatened under Florida state law and Federal law as well.


Both men are presumed innocent until proven guilty in a court of law.  The case was investigated by the United States Fish and Wildlife Service’s Office of Law Enforcement.  Patrick M. Duggan and Assistant U.S. Attorney Mary Kay Costello are in charge of prosecution.